The madness of dumping dog poo in bags in the countryside - 80 dog poo bags removed so far from hedgerow at Chamber's Wall, St. Nicholas at Wade

The other day, while walking my dog along a public footpath at Chambers Wall, St. Nicholas at Wade that is part of the Wantsum Walk, I noticed to my horror there was a huge number of full plastic dog poo bags inside the hedgerow that runs along the edge of the path. 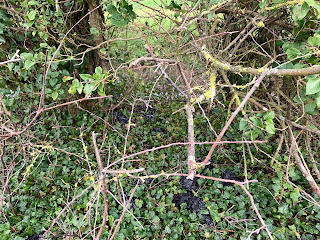 The hedge runs alongside a channel which has reed beds and often water. Today, armed with a litter picker, I pulled out and disposed of 80 bags. 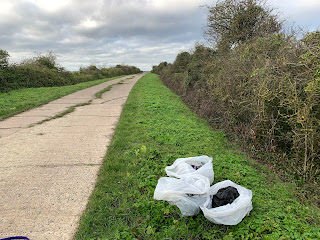 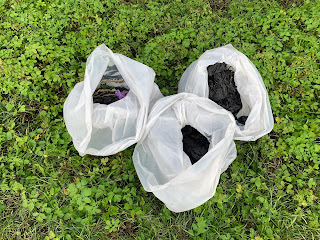 There are still more bags to remove. A bin bag full of poo dumped in plastic for wildlife to contend with for years, or at the least for other people to have to remove and dispose of. As detailed in this great blog post from Nicky By Nature, this is the behaviour of the CPF aka the Countryside Poo Flinger.
So, what should you do with dog poo in the countryside (not a public highway area)? If along a track or path, the Forestry Commission advocate flicking the poop off the path with a stick where it will then decompose. If you bag up the poo, you have to remove the bag from the area. This means taking it to the nearest bin. The worst thing to do is wrap up poo into a plastic bag and then throw it into the countryside. No one is going to collect this discarded rubbish. Stop thinking it's a polite thing to do. It's the worst thing to have done.

Let's end on a positive note! Here's a robin that appeared after I'd removed the poo bags!

Posted by Louise Oldfield at 18:47