Very much looking forward to seeing the poet Lemn Sissay's poem for Margate projected on the side of Turner Contemporary on the evening of January 26th at 6pm. I enjoyed meeting Lemn. One of those human beings who exudes the very essence of being alive and in connecting with the people he meets.  A fine quality for a poet I think.

Lemn blogs here.  Where he reminds us that people with ideas should never be without a notebook.
Article on This is Kent
Posted by MA at 18:54 No comments:

Stand up comedy nights at The Tom Thumb Theatre 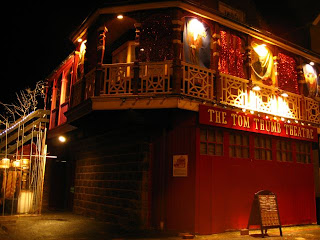 Stand up comedy nights coming every 3rd Saturday in the month to our favourite bijou theatre, The Tom Theatre. How perfect a fit!

Fresh in from over in Broadstairs:
Campaigners are “jubilant” at Thanet Council’s decision to axe the building of a community centre in BroadstairsPierremont Park.
On Thursday January 5th the new Labour leadership of Thanet Council decided not to give the go-ahead to plans to build a controversial new community centre. The decision was greeted by applause from campaigners in the public gallery, who have been lobbying against the building of the centre for the last seven years.
One of the campaigners, film-maker Christine Tongue, said: “This is a great day for anyone with a love for Broadstairs’ historic park.
“Building a community centre here would have meant cutting down trees and fatally damaging the fabric of the park – all for something that precious few people wanted.”
But the decision, according to Christine, also marked a victory for popular democracy over the desires of a “local elite”.
“I and many others believe the building of the park was always only the pursuit of a small number of powerful figures in Broadstairs society. Why did they want it? As a local resident once speculated in one of our films: “self glory”.
“And, even worse, they were prepared to take out a loan costing a total of nearly a million pounds to do it, burdening the public with a huge debt.”
“But perhaps there should now be an inquiry into why this waste of public time and money was allowed to happen.”
Christine claimed the building would have gone through if not for the protest movement. “People started campaigning against the centre back in 2005. Now a change in the leadership of the council has stopped the project -- but this wouldn’t have happened it if the protesters hadn’t kept the campaign going.”
Christine also said that this victory sends an important message to campaigners across Thanet.“My message is to people who are fighting against corrupt or damaging developments across Thanet is simple: keep on going,” she said.  “Constantly we were told the centre was a “done deal”, that it was inevitable, but we kept on campaigning and the result is we have saved our park.
“I don’t claim to be a leader of this campaign – it’s been a real joint effort on the part of the local community. I’d like to pay tribute to everyone who has worked so hard to stop this senseless scheme going ahead.”
“People are stronger than they know, they have more power than they think. Don’t bargain with the powers-that-be, don’t compromise. Tell them what you want - and if they won’t listen to you use every means you can to make them hear you!”
For more details telephone Christine Tongue on 01843 604253 or email inmeds@yahoo.co.uk.
Posted by MA at 17:29 6 comments: Links to this post