'The Council adopts a policy of not allowing scheduled, pre-planned or otherwise timetabled flights between the hours of 23:00 and 07:00.  That a period of 1 hour at either end of the flying day be allowed for late/early arriving flights only.  That a penalty be applied to any flights arriving during the 1 hour periods.  No take-offs will be allowed between 23:00 and 07:00 hours and a schedule of exceptions to the above be prepared to include ‘mercy flights’, and flights for medical emergencies, coastguard movements etc'.

"Firstly, and I want to make this absolutely clear, we are not against the airport. We in the Labour Group most sincerely want to see a thriving airport creating good jobs for the people of Thanet.

However, we hear constantly of Thanet being termed as a ‘dumping ground’ in relation to social and economic issues and sadly, statistics show overwhelmingly that poor health standards here in Thanet are far worse than the average for the South East and even the whole country.

On a personal note, I have witnessed at first hand the effect that sleep deprivation can have on an individual. One of our wonderful grandsons has decided that for him, daytime starts anywhere between 3am and 5am and the cumulative effect of this over several months has had a devastating effect on his equally wonderful mother’s health and wellbeing.

Hopefully, that situation is a temporary one. The prospects for many Thanet residents if we are not clear as to what is and what is not reasonable could be permanent misery.

At this evening’s meeting we have heard what happens when there is a lack of ongoing monitoring in relation to grants and again in relation to a lease negotiated in good faith many years ago by this council.

The current section 106 agreement was put in place over a decade ago and has served Thanet very well indeed, but sadly the last two Conservative administrations at TDC have failed to review the agreement every three years as was originally planned, and it is clear from recent reports sponsored by the airport that they now see the 106 as an outdated agreement and will soon be pressing to extend their operations at night.

Chairman, America and Europe are currently experiencing very tough times due to the actions of a few bankers who saw loopholes in regulations and exploited them at all our cost.

We in Thanet suffer disproportionately from almost every social and economic ill. We do not need to add poorly regulated night time flying across our island as a further environmental problem.

The Labour Group therefore believes the council needs to give a clear steer as to what is and what is not environmentally acceptable here in Thanet. We support the airport but not at any environmental cost to the people of Thanet.

Chairman, I move the motion printed at item 8a in the agenda and option 2.2 to debate the motion".

However, the TDC Legal Monitoring Officer advised the Chairman that the motion could not be allowed for complex legal reasons and pointed to a letter of advice from Bevan Brittan LLP (dated 14th July - the very day of the meeting) that had been left on councillors seats just minutes before the start of the meeting.

An intense debate on the extremely late legal advice followed in which Labour councillors explained that the motion had been handed in person by Cllr Hart to the Legal Monitoring Officer more than five weeks before the meeting on the 7th June and that the Monitoring Officer had read it and accepted it as a valid motion. A month later the motion had also been accepted onto and clearly printed in the council agenda as item 8a.

During the debate it also became clear that on the evening before Thursday's council meeting (13th July) Cllr Bayford, the Conservative Council Leader, had raised objections to the motion and that as a direct consequence further legal advice had been requested on the very day of the council meeting.

After the meeting Cllr Clive Hart said "TDC had my written motion to council for more than five weeks and the only thing I was aware of during the whole of that period was that it had been accepted onto and printed in the council agenda. The motion was submitted to support the councils own TDC Airport Working Party recommendations that had been 'left off' of the agenda of an Overview & Scrutiny Committee meeting in error and the actual wording of the motion simply confirmed the basis of the existing 106 agreement that the Conservative administration had failed to review for the past eight years".

The night flying motion to council was also directly in line with the 2011 Thanet Labour Manifesto that proved so successful with the public that it helped Thanet Labour to increase its number to twenty six councillors at TDC, just one short of the Conservatives.

When is a 5 floor HMO not an HMO but a 'fantastic family dwelling'?

Forgive me for laughing. But seriously.

How many kitchens and bathrooms does one single family dwelling need?

The answer according to the owner, Dr Ali, of the Grade II Listed Georgian townhouse at 45 Hawley Square is 5. A planning application has been submitted for change of use from a Private Members Club to a single dwelling.

"The current owner of the property...is looking to restore the building to its original purpose. Internally the existing layout requires little alteration to create a fantastic family dwelling."

I'm sure good Margate folk know a HMO (house in multiple occupation) when they see one. We've had enough of them to get rid of for the last firty years. If it looks like an HMO it probably is an HMO. Unless the prospective residents of this house will be so into cooking and bathing that they must have a kitchen and bathroom on very single floor, just in case they need to cook another snack or have a shower.

The proposal to install this number of kitchens in terms of building regulations will require a degree of fire separation that would require an unacceptable level of modification to a Listed building. It's probable that the owner imagines, that since the Coalition Government scrapped Labour's requirement for HMOs to secure planning permission to convert from a single dwelling, that this would be an easy ride. But you see, ownership of a Listed building comes with red tape and responsabilities. As an owner you often can't make modifications as you choose. This is why Listed buildings really don't make great rental property investments for the bottom end of the market. This of course is dependent on Thanet District Council enforcing the regulations. 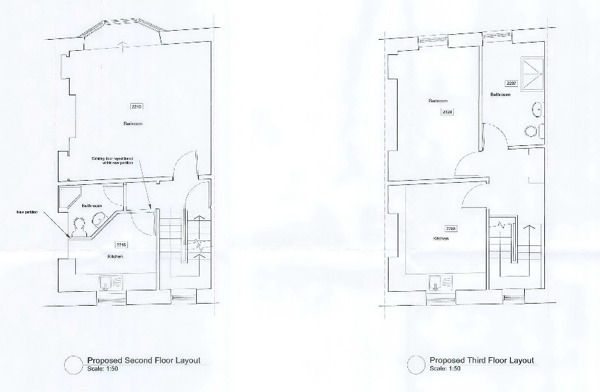 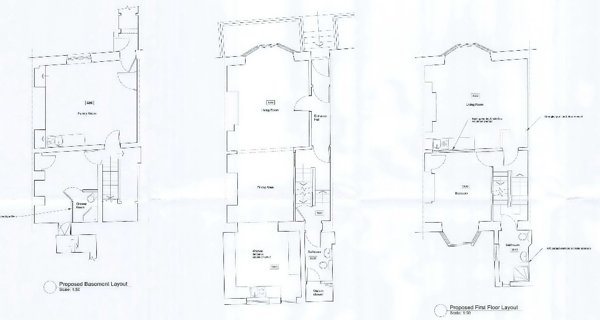 If Mr Ali intends to create self contained flats he should apply to do so, which would require extensive fire and sound separation. Perhaps this will not be cost effective compared to the rent he will achieve out of small units on a busy Margate high street. There appears to be no extra refuse storage for 5 units. Conversion works to a listed building are not cheap.

You can view and comment on the application: http://www.ukplanning.com/thanet

Email ThisBlogThis!Share to TwitterShare to FacebookShare to Pinterest
Labels: planning

Your chance to get into film making - and it's free! Beeping Bush in Margate's Old Town will host a one-day "Introduction to digital filmmaking" workshop and networking drop-in event for all who are interested in how to produce a micro-budget short film or documentary. Through practical "hands on" professional camera, lighting, sound and editing demonstrations; and screening Q&A discussions of previously made local films, participants will learn how to make best use of their own and hired equipment.

Bring along your previously made films (on DVD) for group screening and feedback!

Emma, a previous participant says "It was great fun day, a met a lot of new local filmmakers and I learnt a lot about how to make the most of my budget!"

Another participant Sophia adds "As a student studying Media communication and specialising in film this event was invaluable. I learnt so much in just a short space of time and can only imagine if you guys could have given more of your time. It was a great hands on experience in a beautiful setting."

The event is free but prior booking is advised. The workshop takes place on Saturday 23rd of July from 10.30-4.30pm. 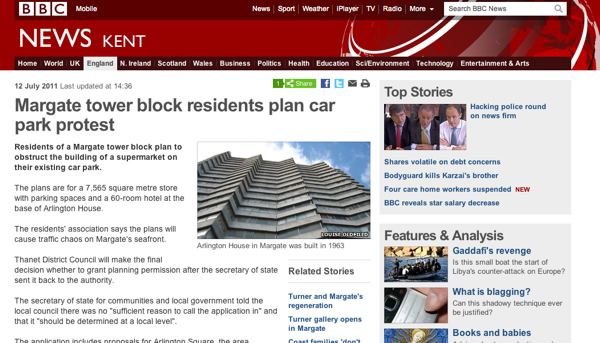 Hold the front page! Arlington House residents are planning direct action to halt the planned development at Arlington House and Square. The application is being covered on the dedicated Arlington House blog. So pop over there for a read what's going on.

In follow up to last week's post on EKO:
Note: The Eurokent site is land between Westwood Cross & the Newington estate on either side of the new main road.
From Cllr Clive Hart - Labour Leader of the Opposition at TDC.
"In recent years we in the Labour Group at Thanet District Council have had reason to voice concern about just who exactly is deciding the direction of the district council. Our feelings, clearly outlined in our 2011 manifesto, are that all too often officers appear to be deciding the direction of TDC rather than councillors who have been democratically elected by local residents.
The East Kent Opportunities Eurokent proposals are yet another point in question. Land clearly designated for employment use by councillors through robust council procedures is simultaneously being promoted by EKO (a joint TDC and KCC venture) for substantial housing development.
We Labour councillors cannot understand how council officers were ever directed to make proposals which go so blatantly against TDC's own established policies. At last weeks public 'consultations' EKO officers promoted plans that go totally against TDC Planning Policy and did so whilst at the same time clearly stating that EKO was 'answerable to councillors'.
None of our 26 member strong Labour Group of councillors have endorsed the EKO housing proposals and I cannot imagine that any of the 3 members of the Independent Group have been involved either. At best, some of the 27 members of the Conservative administration may have had some kind of involvement but in any event they are now clearly a minority of members at TDC.
In short, at a time of austerity and cut-backs, council officers have been allowed to carry out a substantial and extremely costly amount of work on a project that may well not meet the requirements of the full council. Possibly worse still, proper employment opportunities for the site may well have been missed whilst officers have been clearly misdirected in their efforts".
Cllr Clive Hart - 01843 298770 or 07980 652 896.
Published by Thanet Labour Group Press Office, 44 Northdown Road, Margate, Kent, CT9 2RW.
Posted by MA at 17:42 1 comment: Links to this post