There's a photographic exhibition coming to the Margate Harbour Arm on April 3rd.
Glimpse seeks to celebrate the Margate UK Flickr group's website postings from the first two years, up until January 2009, and how the members of this online community came together through their photographs of Margate. The exhibition is as much about the people and the collection as the individual images themselves. Some people have never exhibited before, some are artists, some are native to Margate, some were just visiting.

What counts is that they came to Margate, were inspired to take a picture and motivated to share it. Glimpse will run until Sunday 19 April. The opening night event is on Friday 3 April, from 5pm-9pm, with delicious food to try from The Indian Princess restaurant. For more information go to the Glimpse blog at: http://glimpsemargate.blogspot.com/

And that's not the only thing on in town that night. The same Friday has the Turner Contemporary Project Space opening of their new show: The Sound of Music, which explores the links between art, sound and music. Featuring 30 works in a variety of media from artists including John Cage, Turner Prize winner Jeremy Deller, Turner Prize nominee Angela Bulloch and Pierre Huyghe, all selected from the collection of the FRAC Nord-Pas de Calais in Dunkirk. Alongside Sound of Music, Turner Contemporary presents Crossroads, a new video installation by David Blandy. Crossroads investigates the mythology surrounding the legendary Robert Johnson, a bluesman with three gravestones, 29 recorded songs and only two known photographs, who reputedly sold his soul to the devil at the crossroads. The Sound of Music and Crossroads will run until Sunday 14 June.

Also, for one night only local artists will transform the interior of the Substation Project Space into a fantasy stage-set which will encompass both the audience and the evening’s musical performers. Headline act, French-Swiss two piece Vialka, proclaim themselves to be a “Turbo-folk mini-orchestra”, and promise to thrill the audience with their cabaret-influenced punk rock. Support comes from Margate’s Neverest Songs, Faversham’s Tikoloshe, and Canterbury/Brighton act Savlon. In addition, the local Roadkill Fanzine will be holding a stall at the venue, selling ‘zines, T-shirts and drawings. Tickets for this event are £4.50 payable on the door.on the night.
Posted by Louise Oldfield at 18:26 3 comments: Links to this post

This might seem like a strange request, but I'm looking for a secure small field or paddock where I can train my dog in a couple of times per day for half an hour. Ideally not too far from Margate. I need to be able to park nearby and the field or area should be secure and without other dogs or distractions like game or horses. I've found a field with a gate in Marshside, but that's quite a trek from Margate. Happy to pay for the use if it's private land. But if there is somewhere with public access I could use, that would be fantastic. If anyone has an idea please can you pop me an email to margatearchitecture@gmail.com

Thanks
Posted by Louise Oldfield at 20:09 2 comments: Links to this post 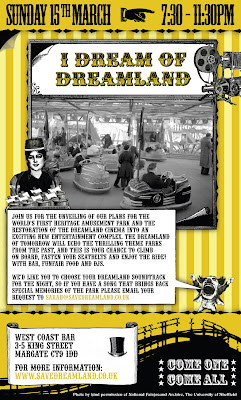 Just in from the lovely folks at the Save Dreamland Campaign:

Join us for the unveiling of our plans for the world's first heritage amusement park in Margate. With bar, DJs, funfair food and film. Choose your Dreamland soundtrack for the night and email your requests to sarah@savedreamland.co.uk.

Climb on board, fasten your seat belts and enjoy the ride!

Posted by Louise Oldfield at 13:50 No comments: Links to this post

Very pleased to see a specialist food shop coming to the Old Town that really fits with Margate's heritage. It's due to open next week on March 11th in the shop that was previously the barber's that closed before Christmas. The shop will be baking their own pies at a friend's shop in London. I look forward to sampling some tasty pies and hope we will see more of this type of shop opening in Old Town.
Posted by Louise Oldfield at 18:05 10 comments: Links to this post

Lovely photos of Margate Harbour from the 1920s 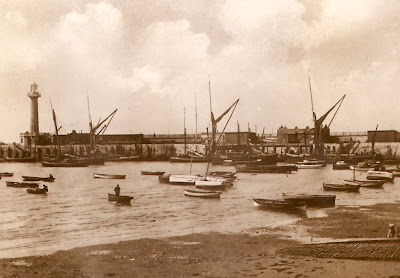 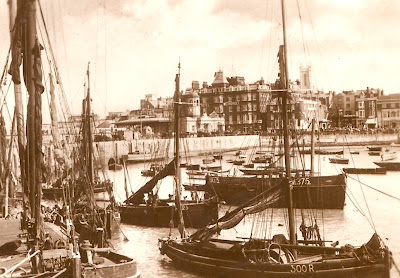 Thank you Tony Beachcomber for letting people use these images from his private collection. Isn't it sad how the front at the Harbour lost some lovely buildings such as the Hotel Metropole. The modern building now next to Royal York Mansions really is an inferior piece of architecture. Hopefully the soon to be proposed hotel coming next to the Turner will be a beacon of quality modern architecture. One lives in hope.
Posted by Louise Oldfield at 09:23 2 comments: Links to this post

Is this really the end of Eastcliff Richard?

Say it ain't so, folks. I'm a bit behind in writing this up, but I was sad to hear that my favourite blogger and celebrity extraordinaire from the airport runway on the other side has given up blogging. I'm going to miss him. Please don't go, ECR!
Posted by Louise Oldfield at 09:17 No comments: Links to this post 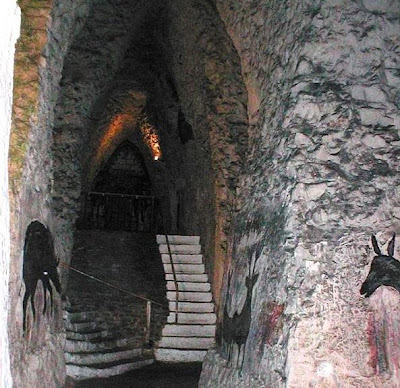 What a brilliant idea! I was really shocked to see recent talk of filling the Margate Caves up and building a car park on top. Can't remember where I saw that. I'd love to see the caves opened and maintained. It's one of those original Margate attractions that would have universal appeal along with the wonderful Shell Grotto, a heritage funfair at Dreamland etc.

The Thanet Times says Kevin Crace, who is also trying to save and revive the Westgate Pavilion, has put in a bid to save the caves and get it licensed as a wedding venue. Looking at the shape of the tunnels, it does look churchlike. I hope Kevin is successful. We need more ideas like that in town.

What does everyone else think?
Posted by Louise Oldfield at 08:26 2 comments: Links to this post