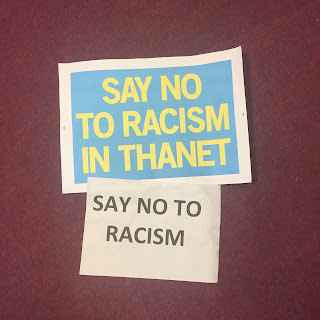 
"We are proud to live in a diverse and tolerant society. Racism, xenophobia and hate crimes have no place in our country.

This Council will continue to work to ensure local bodies and programmes have the support and resources needed to fight and prevent racism and xenophobia.

We reassure all people living in Thanet they are valued members of our community."

Cries of 'shame' and 'disgrace' erupted from the packed public gallery. Independent Councillor Bill Hayton turned to the public gallery to state he wasn't racist.

UKIP Councillor Sarah Larkins, also deputy Mayor of Ramsgate, who recently apologised for a Facebook post in which she urged London voters to vote for "anyone but a Muslim" in the London Mayoral election also voted against debating the motion.

Women pension equality campaigners from the WASPI campaign stood up and walked out in disgust in their lilac campaign sashes. The Council had earlier voted in favour of a motion (again proposed by Thanet Labour] supporting their campaign for equal pension rights for women.

It was a night where two universal concepts were put to the Council for support and where only one had the support of the Council even in terms of affording it a debate. The women campaigning for equal pension rights could see the problem with not proactively debating the issue of racism. It's a shame the elected Councillors could not.

Edited to add:
The motion was based on an Amnesty International campaign encouraging local councils to take a stand against racism and xenophobia:

"Local leaders must condemn these actions immediately and do everything in their power to make people safe and welcome. Tell your council to speak out against racism, xenophobia and hate crimes now." Follow the hashtag #AgainstHate.

Posted by Louise Oldfield at 22:12 5 comments: Links to this post