What's the saying? A week's a long time in politics?

The first information released was this on January 22nd, stating:


"Thanet District Council is asking members of the public for their views on a proposal to remove water sampling tests at Walpole Bay in Cliftonville."

Their reasoning to remove the water sampling was based on:


"A recent review undertaken by the council and the Environment Agency (EA) however has identified that Walpole Bay is no longer primarily used as a bathing beach. Instead,

visitors now predominantly use the beach for walking, sunbathing and to enjoy the excellent rock pooling habitats.

Activity at the beach was monitored by the EA during the last bathing water season.  The results revealed that between 29 July and 3 September 2013, at the water sampling point, there were 58 visitors on the beach and of those, five swam in the sea."

At this juncture, the Environment Agency report referred to was not made available to the public. And it wouldn't be until a week later and the public consultation was still running. There was no explanation of what the 'water sampling point' was.
Social media lit up with many people incredulous at the stated bathing figures for August 2013. Many upset that this seems like a defeatist step back not the hoped for move forward. Local businesses like seafront alchemist, Haekels even offered to clean up the promenade for free.

The hashtag #walpolebaybathing was born along with the Walpole Bay Bathing Facebook page where people started to share information on how much they loved bathing at Walpole Bay and posting photos.  It started to collate articles celebrating the Walpole Bay tidal pool and connecting it to a movement of outdoor swimming internationally. And this has been the most positive effect of the council's consultation.


Then on the January 23rd Thanet Council published more information about the consequences of the public voting no to the de-designation. The Environment Agency report was still not available.
Leader of the Council, Clive Hart, took to Facebook, stating 'THE FACTS - PLEASE READ CAREFULLY - ESPECIALLY THE CONSEQUENCES'. But to many people, it seemed the facts were not available because the Environment Agency report was not published.

The Council then added a Walpole Bay FAQ. And, this week, Thanet Council published the Environment Agency report data (PDF). It then became clear that the number of bathers referred to in the previous statements from Thanet Council were from a very narrow section of the Walpole Bay beach of the water sampling site. Zone H was the site on the map and one of 13 sections of the beach. 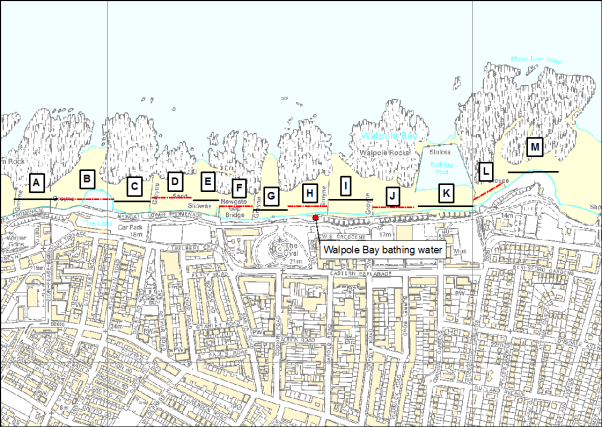 What seems to have not been included in Thanet Council's consultation information was zone K, which contains the tidal pool. The report states: 'The results from the survey indicated that zone K had the most number of people using both the beach and the sea'. Therefore Thanet Council's claim that that Walpole Bay should be de-designated for bathing seems to be based on information relating solely to the small area of the water sampling site, zone H.

“In line with our Destination Management Plan, we’re keen to make the most of Thanet’s stunning natural assets and to provide a diverse offer for our visitors.

“The area from Walpole Bay up to Botany Bay is a haven for wildlife and offers unspoilt beautiful bays which can be enjoyed all year round.

“The recent review of Walpole Bay demonstrates a clear change in visitor demand, with very little evidence of people swimming in the sea. Removing water sample tests here would mean no change in the level of service provided here and in fact would mean we could do more to positively promote the beach to a new audience.”

The council's motivation seems is to avoid non-compliance with stricter EU water quality standards coming in in 2015.

I have some questions:

- Does the Environment Agency report really show a change in visitor demand at Walpole Bay?
- Is there very little evidence of people swimming at Walpole Bay?
- And what about the walk from Margate Main Sands to Walpole Bay rather than just from Walpole Bay to Botany Bay?
- If the beach is de-designated for bathing, can funding for upgrading the well used bathing facilities still be planned and applied for?
- Will the cleaning of promenades and the beach be increased with need if the council has stipulated there is a declining need and need to prioritise Thanet's remaining bathing beaches? People seem to agree that Cliftonville seafront needs more cleaning not less.
- Why did Walpole Bay have water quality issues that other bays didn't. Can this be resolved?

The report actually concludes that: 'the location of the EC sampling point is not representative of an area used by the public'.

Vote No to the de-designation of Walpole Bay for bathing.
It is clearly well used for bathing by the local community. The bathing facilities need improving, not down grading. This stretch of Cliftonville coastline is beautiful. It's a key asset to a recovering area of Thanet.

Take part in our own Walpole Bay Bathing survey on the proposal.To comment on this proposal please do email consultation@thanet.gov.uk or write to Walpole Bay Review, Thanet District Council, PO Box 9, Margate CT9 1XZ. The consultation is open until February 16th.


Here are some further links about the Walpole Bay Tidal Pool and Bay that you might find interesting:
Blog post from a visitor to the area who came to bathe at the pool.
A piece with photography by celebrated landscape fanatics Ken Worpole and photographer Jason Orton.
History of the construction of the tidal pool.
Collection of historic aerial photography Britain From Above


Posted by Louise Oldfield at 10:20 No comments:

The management of Margate Media Centre is up for tender on behalf of Thanet District Council and its partners in the Recreate Interreg project:
https://www.businessportal.southeastiep.gov.uk/sece/opportunity.nsf/fcontent?ReadForm&requesttype=viewcontract&region=REG-UATA-79EMC9&authority=ORG-DNWA-7BSHJE&docid=OS-DNWA-9F8M4U&sd=&stype=&rv=authority&start=1&count=10&contentid=1.003 Thanet Council states:

"This is an exciting opportunity to establish a vibrant creative hub in the heart of Margate's old town, with a package of support for the successful tenderer to ensure the viability of the enterprise and maximise its impact as a regeneration project.You can also send questions about the tender to sophie.jeffrey@thanet.gov.uk up to 3 working (Mon - Fri) days before the close of Submissions at 14:00 hours on 28th February 2014. Answers will be shared with all those who have expressed an interest in the tender. No telephone calls will be accepted."
Posted by Louise Oldfield at 11:01 No comments: