Top 10 things in Margate by The Guardian

"The once-glorious seaside resort may have fallen on hard times, but after years of neglect a new £17.4-million art gallery is at the forefront of a bid to restore "Merry Margate's" fortunes. And, having missed out on the gentrification that transformed many of Britain's coastal resorts, Margate is now beginning to capitalise on its nostalgic, retro appeal.

Opening in the spring of 2011, the Turner Contemporary will aim to entice the arty crowd away from the chichi streets of Whitstable and Broadstairs down the coast, and celebrate the resort's proud association with the arts – from JMW Turner to Tracey Emin – in the process.

But there's no need wait until it opens before making the hour-and-a-half long trip on the new High Speed train from St Pancras International. Look past the brutalist façade of Arlington House waiting to greet you and you'll find grand Victorian and Georgian buildings, ornate enough to rival the smartest squares of the capital; vibrant, buzzing cafes and art galleries, smart boutique B&Bs - and even a Michelin-rated restaurant.

With Tim Burton's new movie fuelling Alice in Wonderland fever, where better to have afternoon tea? The Mad Hatter's is old-fashioned English eccentricity at its glorious best, with Victorian clutter vying for shelf space with year-round Christmas decorations on two floors of a lop-sided corner building. Pots of tea or coffee and doorstop-sized slices of boozy fruitcake and Victoria sandwich are served up by the Mad Hatter himself, resplendent in waistcoat, bow-tie and tinselled top hat. Be sure to spend a penny in the impressive turn-of-the-century toilets too.
• Lombard Street, +44 (0)1843 232626.

Sprawled across three dusty floors of an old ice-cream factory, R G Scott's is a world away from the eye-watering mark-ups and careful tip-toeing of its London equivalents. There's antique furniture, quirky bygones and architectural salvage stuffed into every corner waiting to be sold at a refreshingly honest price. The basement also houses Junk Deluxe and 20th Century Frocks, selling 20th-century design classics, kitsch curiosities and vintage clothes.
• Grotto Hill, +44 (0)1843 220653.

The Reading Rooms opened in 2009 to a fair degree of scepticism about whether Margate was ready to sustain such a sumptuous place to stay for the night. Six months on, the diary is bulging, it's won a place in the coveted Mr & Mrs Smith directory and makes the perfect place to indulge yourself after a day exploring the coast. The delicious locally-sourced breakfast is served straight to your room – just the thing to wake up to after a perfect night's sleep in a ginormous La Maison bed.
• 31 Hawley Square, +44 (0)1843 225 146; thereadingroomsmargate.co.uk. Rooms from £110 per night.

Poet TS Eliot penned his poem The Wasteland while sat beneath the Nayland Rock shelter, when he was recuperating just up the coast in Cliftonville in 1921. The bracing coastal air was once well-regarded for its medicinal qualities, and at this time the town was a popular spot for shell-shocked war veterans seeking solace in the smart hotels along the seafront. The structure, which looks out over Margate's sands, has now been granted Grade II listed status after a long campaign backed by former poet laureate Andrew Motion and Alan Bennett, who suggested the splendid Victorian shelter should be listed regardless of any literary associations.
• Nayland Rock Shelter, Marine Drive

Since it was given a colourful splash of paint a couple of years ago, the Harbour Arm (a 19th-century stone pier) has become home to artsy hang-outs like BeBeached – a cosy, dog-friendly cafe selling delicious Sunday roasts – an ice-cream stall, a bicycle hire shop and a couple of artist's studios. At one end sits Droit House, soon to be adorned with Tracey Emin's neon declaration of her enduring love for the town, at the other stands a proud sculpture of a "shell lady" by artist Ann Carrington. Other ladies are wheeled out during the summer months, each named after a famous lady of Margate – from Baroness Orczy who wrote The Scarlet Pimpernel to Phyllis Broughton, a local gaiety girl.
• Margate Harbour Arm, CT9 1JD. BeBeached, +44 (0)7961 402612; Caitlin's Beach Cruisers bicycle hire, +44 (0)7956395896. 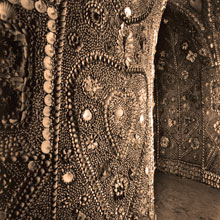 If the shell ladies manage to whet your appetite for all things crustacean, take the short walk to Shell Grotto, a bizarre network of tunnels adorned with mosaics made entirely from sea shells. The site was discovered in 1835 when local James Newlove lowered his son into a hole he discovered while digging a duck pond, but its origins remain a beguiling mystery. Some say it's the site of an ancient pagan temple, while others scoff that it's a mere Regency folly. Whatever the story, it's a fantastic place which is more than worth the criminally cheap £3 entry fee.
• Grotto Hill, +44 (0)1843 220008; shellgrotto.co.uk.

The backstreets of Margate are the last place you'd expect to stumble across a Michelin-rated restaurant, but the Indian Princess scored a first for the town when its modern Indian cuisine was listed in the latest guide last month. The menu gives locally-sourced ingredients a modern Indian twist with dishes like Bengali-style sea bass, Kentish lamb with aromatic basmati rice and most intriguingly of all, chocolate samosas served with a creamy cardamom sauce. The gourmet lunch specials are good value at £19.95 for three courses. Booking is a must.
• King Street, +44 (0)1843 231504; theindianprincess.co.uk.

No trip to the British seaside is complete without whiling away a few hours and whittling away a few pounds in the arcades that line the seafront. The best of the bunch is the gaudy, baby-pink Flamingo, with its kitsch façade of a thousand lightbulbs; or you could head for the arcade at Dreamland, a once majestic theme park which (apart from the arcade) is currently closed but due to reappear as the UK's first "heritage" theme park in 2011. This is where Paddy Considine plied his trade in 2000 film The Last Resort, when Margate doubled for the fictional seaside town of Stonehaven.
• The Flamingo, Marine Terrace +44 (0)1843 296 160. Dreamland, Marine Terrace

It's not for nothing that Margate was once the king of British seaside resorts. To the first-time visitor expecting the usual expanse of pebbles the beach is something of a revelation, with the sweeping sands, clean and golden enough to grace the Costa Brava if only the mercury were able to crawl up a notch or two. There's a cafe on the main sands should you need an ice-cream or a beer to cool off, and Manning's seafood stall is a short stroll away should you want to lunch like the cockney holidaymakers of yore.

Just across the road from the site of the Turner Contemporary is what's been optimistically dubbed the "creative quarter" by the tourist board. In reality the Old Town is a pretty network of quaint streets where a smattering of trendy cafe bars awkwardly brush shoulders with traditional spit and sawdust-style boozers. You can shop for retro design classics at Helter Skelter, have a browse around the numerous art galleries springing up on a near weekly basis, before taking the weight off your feet at the Harbour Cafe with a coffee and a home-cooked burger.
• Helter Skelter, Market Place, +44 (0)7885 592 880; Harbour Cafe, 5 The Parade, Margate, +44 (0)1843 290 110.

Email ThisBlogThis!Share to TwitterShare to FacebookShare to Pinterest
Labels: press