What do they want? More of our money and permission to build houses on agricultural land? EKO you have us confused 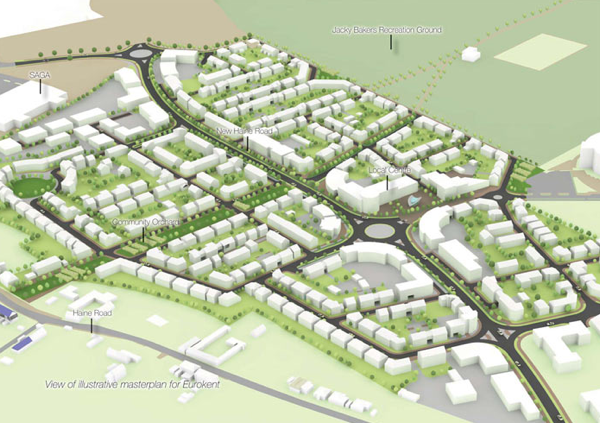 Margate! You have until 8pm today to pop into the Media Centre in King Street, Margate Old Town to tell EKO what you think!

I have to admit to being slightly confused sometimes.

Why would we, the public, repeatedly give money to a risky business venture in order to create jobs and sustain employment by the creation of a business park on grade I agricultural land and to be told, only a few months ago, what a great success it was. And then, the next minute, be told that most of the site is vacant, not doing too well and now they want permission to build houses on it.

East Kent Opportunities (EKO) is a joint venture between KCC and TDC. The idea was to transform agricultural land near Westwood Cross into a business park, The Euro Kent Business Park, to create valuable jobs for the area. The site is located in the empty fields you might have looked at while stuck in a traffic jam navigating the roads around Westwood Cross. There seems to be a crisis of identity for EKO which has continuously come back to beg for more hand outs from the public purse.

"The purpose of this joint project with SEEDA is to create jobs in Thanet by providing the type of employment space currently under-represented in the District. The District, including the Council’s own employment units, did not previously include modern service sector accommodation or sufficient ‘starter’ employment units. The 3 current tenants comprise a new branch of a nationwide business, a business previously located in premises outside the District and a local business which has expanded rapidly. This pattern is repeated for the other units currently being pursued by prospective tenants, so it is clear that this development is fulfilling a need in the District.

4.3.1 The development of Eurokent Business Park fits with Theme 1 (Thanet’s Economy) of the Corporate Plan together with Sub-theme 1.3 (Available Employment Opportunities). The purpose of the development is to create high quality office and industrial units to generate additional / support existing employment in the District."

TDC then issued a press release in March this year proclaiming a Eurokent a great success:

"A new business park in Ramsgate, that was developed to create job opportunities in Thanet, is already 60% leased or under offer, less than a year after the first companies moved in. The Eurokent Business Park along New Haine Road is a joint project with the South East of England Development Agency (SEEDA) to help create jobs in Thanet by providing new employment space, not previously available in the district. The land for the project was donated by Thanet District Council, with SEEDA contributing £4.4m for the construction of the buildings and fit-outs of the industrial units. The project also attracted a further £1.3m European Regional Development Funding through SEEDA."

"The Eurokent site is allocated under Thanet District Council’s Local Plan for business and industrial purposes but is mostly vacant. Some of those businesses still located on the site fall within a B1 use class (offices or light industries), including the SEEDA Innovation Centre, Marlowe Academy and SAGA Call Centre."

And will there be affordable housing?

"Yes, affordable housing forms an important part of the proposal and it is anticipated that 155 (approximately 30%) of the housing will be affordable. These will be a mix of high quality family homes and apartments."

How was the project funded?
£4.4m was given by SEEDA (South East of England Development Agency) for the construction of the buildings.TDC gave the land and £1.3m came from the European Regional Development Fund. A substantial amount came from from bank loans.

In essence, the Council set up up a property development  and speculation company. EKO has periodically come back to TDC to ask for more money to cover the bank interest on the loans. Repayment of these bank loans has been draining TDC finances. EKO now wants to build 550 new houses on this land.

You might not have heard about it, but they are running public consultations for you to share what you think about the idea of building a load of new homes on agricultural land in a low employment area.
Here are the details on the consultations in your area:

That's today folks! Open until 8pm tonight. Pop in and tell them what you think.

But if you can't make it along to meet the EKO people in person, fear not! You can send them your views directly. Either fill out the form on their website here.

Or send them directly to:

So it is no longer about creating jobs, but creating houses on what was Grade I agricultural land?
More housing means more people in Thanet (there are 880 empty dwellings in Cliftonville and Margate centre).
So, to protect EKO's investment, we actually raise the unemployment levels in Thanet.
If you don't see that as a problem, think about the traffic at Westwood Cross on a Saturday or Sunday and imagine what it will be like if these 550 houses are built, in addition to the 1000 that already have planning permission on the other side of the road.