This week I attended the launch of We Will Gather in London. Built by those lovely folks at Revolutionary Arts, backed by the Office for Civil Society and Nesta, the site's raison d'être is to facilitate the coming together of good people to do good things.

The site's founders, Dan Thompson (Empty Shops Network and Revolutionary Arts), Sophie Collard and Lloyd Davis have strong track records in facilitating and enabling people to, you know, do stuff.  As Lloyd put it at the launch, this is organising without organisation. We will Gather itself is an idea, a collection of other people's actions brought together through enabling technology.

So, to give it a try three days ago I registered a gardening action on the Square where I live here in Margate. I tweeted '#wewillgather help ct9 1ph' and the site automatically created an event for me to then fill in the details. My proposal was for five people to come together to help weed the rose bed and to remove the dead blooms.

Within a few minutes a fellow Margatonian had joined up and Margate tweeps were enthusiastic at the idea.

Today a total of five people turned up at the agreed hour of midday. Bags, gloves and tools in hand. We got to work in the sunshine. We chatted about new things and learnt of other events to go to. Passers by stopped and asked if they could be involved in future gardening events. One lady, called Rose, said she loved gardening and would love to join in. A series of three couples sat on the opposite bench for a while and each one made a comment at how much better it looked and said what a great idea it was. 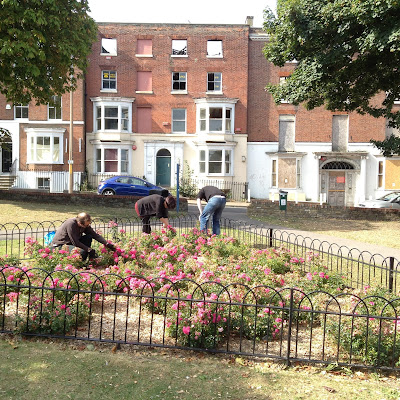 One simple tweet, with one simple proposition lead to me connecting physically with a total of 13 people in a constructive way in my neighbourhood. Nevermind the number of people we reached through social media. We even made it, unbeknown to me, into the local paper. Without We Will Gather this would not have happened. 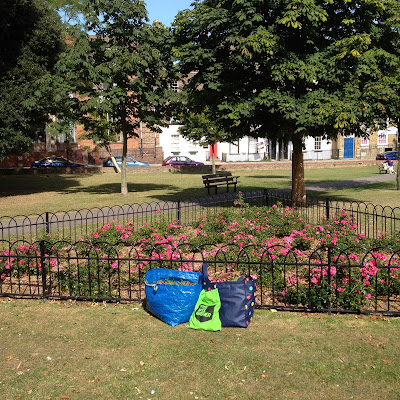 Those of us working within our communities know how hard it can be to recruit the willing. How much more energy than executing the task at hand it takes. The site is still in beta I believe and already I can think of ways that it might be improved. But this will all come through using it and feeding back. This activity is a two way street. As is the work that many of us do within our communities. We're not just there to pick up the pieces of the broken and the underfunded. To step in and resolve the mismanaged. We're also there to be listened to.

“Dan Thompson showed the best of Britain by helping organise the clean-up operation after last summer’s riots. He also demonstrated the power of the internet as a force for good: bringing people together to make a difference in their community. That’s why I’m delighted that the Innovation in Giving Fund has been able to support Dan to launch #wewillgather. This site will make it easier for people to stand up and join others to make a difference – I wish it every success.” David Cameron

If you want to implement the so called Big Society you have to facilitate and promote the coming together of people. We are social creatures. Good things happen when people connect in a good way. Even wondering what the next action to register on the site will be re-engages you with your environment and community. You start to look around, notice things that could be better. Small things that can be attended to to make a difference. We Will Gather goes some way towards this.

At Tuesday's launch I began thinking about a possible phase 2.  A #WeWillGatherMinds. Where the application can bring together expertise and vision of people not necessarily within the same postcode. But more of a meeting of minds. Working on many ranging almost governmental projects at the moment there are times when what is needed is input into specialist areas.

But for now, happy and content with the improved rose bed and an hour well spent.
Posted by MA at 15:44