The news has spread like wild fire this afternoon across local and national media that UKIP have expelled Councillor Rozanne Duncan from the party for making what is quoted as 'jaw dropping comments' in a BBC documentary to be aired in January.

UKIP have so far declined to offer any further clarification on what Ms Duncan, the Deputy Leader of the Thanet UKIP group has actually said. There has also been no statement from Councillor Duncan either. This leaves the residents of the Cliftonville East, the ward that Duncan represents very much in the dark.

Duncan took the seat in last year at a bi-election after Sandy Ezekiel the former Conservative Leader of Thanet District Council, was jailed for misconduct in public office. I also contended this seat as an independent candidate myself. 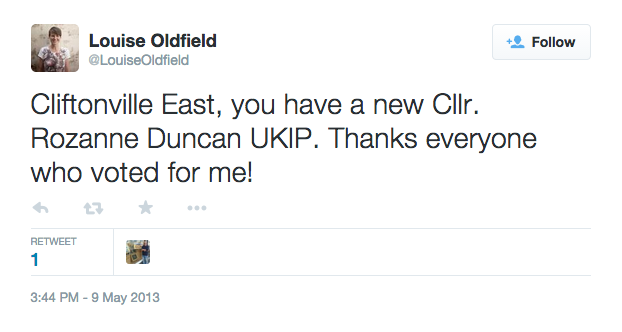 It leaves open the question whether the so called offending comments, that were strong enough for expulsion from UKIP, a party that in recent weeks has thought it acceptable and defended a candidate's use of 'chinky' as a colloquial term often used by people who come from council houses, were comments acceptable for a serving councillor to make. Describing the comments as 'jaw dropping' and offering no further explanation has lead to rampant speculation as to their content.

So, will Rozanne Duncan, who has previously served as a Conservative Councillor, do the right thing by the residents of Cliftonville East and clarify what all of this is about without delay? The silence so far is telling. Her member information page on Thanet Council's website only has a landline number and postal address and not even a council issued email address.

Shouldn't Thanet District Council be clarifying what this is about? Surely residents need to be assured that their councillor abides by the Code of Conduct.

Posted by Louise Oldfield at 19:06