Thanet Parkway Station will bring broadly no improvements to Margate, Broadstairs and Ramsgate

A few days ago I saw Thanet District Council officer tweets about the improvements in train service that the proposed Thanet Parkway Station to be built near Cliffsend will bring. My own blog post on Thanet Parkway in 2011 raising the same concerns as today.

KCC are running consultation events in various locations at the moment. There's a website with details. But what isn't on the website are details of how this shiny new, station manned by two employees and with parking for 300 vehicles in the middle of the Thanet countryside will affect Thanet's existing train service to their towns of Margate, Ramsgate and Broadstairs.

Both Thanet Council and Kent County Council's twitter accounts didn't answer the basic questions of how this new station would affect the existing train services of Margate, Broadstairs and Ramsgate.

One suggested I go to an actual consultation.

Another offered up sending an email enquiry to thanetparkway@kent.gov.uk. Anyone would think their wasn't information relevant enough to be published on the official website. 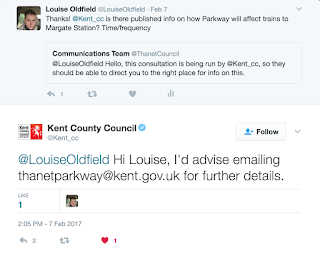 Concerns have been raised by many since the beginning of Thanet Parkway as a concept. It was originally a station to serve Manston Airport. It appears now to be for the benefit of a future new town, given all the planning permissions for housing around there. Here's what my good friend, Ed Targett wrote about it previously:
https://greentargett.com/2015/04/20/manston-parkway-bad-news-for-margate/ with the CPRE stating:
"“It is claimed that ‘A parkway station will provide greater opportunity to access London via High Speed 1… However we question whether it would provide any greater access than is currently available, as people in Thanet & Dover have access to plenty of stations with the HS1 service; the Parkway could simply delay trains on the whole network.

From:
Date: 9 February 2017 at 16:42
Subject: RE: How will the proposed Thanet Parkway Station affect trains to the existing Thanet towns of Margate, Broadstairs and Ramsgate?
Dear Ms Oldfield,
Please accept our apologies for the delay in responding to your email, all members of the project team were at a consultation event yesterday and so we were unable to respond to your query before now.   Please find a response to each of your questions below:
1. We expect the benefits from the Journey Time Improvement Scheme (JTI), which involves upgrading the railway line between Ashford and Ramsgate, to deliver about 3 minutes in journey time saving.  This will mitigate the additional time taken by trains calling at Thanet Parkway, and so we expect the journey times to and from Margate, Broadstairs and Ramsgate to be broadly the same as today.
2. There will be the same number of both high speed and mainline trains between London and the Thanet towns, and all trains that pass Thanet Parkway will call at the station.
Further information on the project can be found on our website www.kent.gov.uk/thanetparkway, including our consultation booklet and questionnaire.
We hope this answers your queries, however if you have any further questions please do not hesitate to contact us and we will respond as quickly as we can.
Kind regards,
Thanet Parkway Project Team | Kent County Council | Sessions House, County Hall, Maidstone, ME14 1XQ | Email: thanetparkway@kent.gov.uk | Visit: www.kent.gov.uk/thanetparkway

What this says is that the journey times to Margate, Broadstairs and Ramsgate will be the same. But then there's the word 'broadly'. Now this we should be worried about. What does 'broadly' mean? We saw with the Golf Open in Sandwich that high speed trains were just diverted from stopping at Thanet towns.

What guarantees are there that we won't lose train frequency or suffer increased journey times?

And if we have nothing to gain in times and the number of trains per day, why would Parkway Station in the middle of the countryside with all the added risks of congestion be being billed as improvements for Thanet by Thanet politicians and Council Officers? There is the very real risk that train services will be cut from the existing Thanet towns.

Posted by Louise Oldfield at 19:38