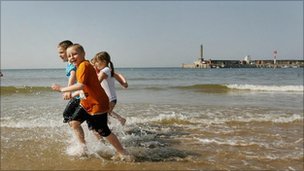 Nice to see some praise coming Margate's way. I was a founder member of the Margate Conservation Area Advisory Group.The wonderful sounding CAAG. Hopefully the roll out of Conservation Areas in Cliftonville will help to preserve some of its fine buildings and green spaces. We meet once per month.
Do get in touch if you would like to know more about the group or get involved.

"A seaside town in Kent has been praised by a conservation body for its attempts to preserve its historic character.

English Heritage (EH) said Cliftonville in Margate should be seen as a benchmark of conservation success.

It said volunteers had worked with the district council to set up a conservation area and make "dramatic improvements".

He said: "Much of the historic townscape of Cliftonville is intact. The quality, scale and setting of the buildings present some real opportunities."

The town is singled out in a new English Heritage guide called Valuing Places: Good Practice in Conservation Areas.

The report said one in 13 of England's 10,000 conservation areas were threatened by neglect and decline."