Pleasurama Drama Continues in the news 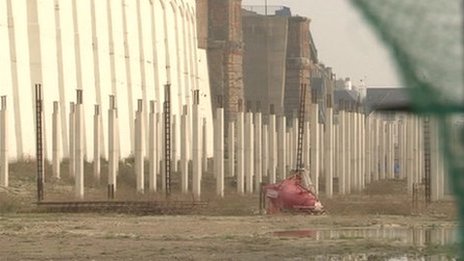 The unacceptable situation over at the Ramsgate seafront Pleasurama site have been hitting the headlines all week. There was a public meeting on Wednesday with over 80 local people present.

The meeting even made the BBC News.

Here are a series of Audioboo files of the BBC Radio Kent Feature. I do love Audioboo.

Interview Transcript...Scroll down to end for best bit...

BBC: If I can just start with you, Alan Poole. Why don't you just take the leasehold back if they are in breach of contract? Why can't you do that?

Poole: As far as I'm concerned they're not in breach of the contract.
BBC: SO there was no time limit set on how quickly they had to build these flats?
Poole: The long stop date is 2017, so we're nowhere near that yet.
BBC: OK. What is the sticking point as far as you can see?
Poole: Well, the sticking point is the developer finding £20m.
BBC: Right. Er, why do they need £20m?
Poole: Well, they need £20m to put up the building.
BBC: So, it's as simple as that is it?
Poole: We're in a very difficult financial climate at the moment. We're in the middle of a triple dip recession. And it's difficult for people to raise the necessary finance to get the work done.
BBC: And I don't suppose there are other developers waiting to come in are there? Or perhaps there are?
Poole: I'm not aware of any developers queuing up to take on this development.
BBC: OK. I think they would say, and we'll speak to their representative in a moment. They would say that one of the problems that they've got in raising the capital is that they don't own the freehold. And they would like it. And why can't you give it them?
Poole: They've got a 199 year lease. And the freehold was going to be transferred when the building was completed. We're currently in negotiations with the developers to transfer the freehold upfront but they will have to pay us upfront.
BBC: Yes. Could you not just have a sort document that says we will give you the freehold when you build the flats.
Poole: Well, we've already got that document.
BBC: So they will have the freehold, but you just want them to build the flats first.
Poole: We would prefer it that way, yes. But they're telling us they need the freehold to get access to the funding.
BBC: Ian Driver who we spoke to earlier says this company has no history of developing this sort of site. Is that true?
Poole: Ian Driver is a publicity seeking opportunist.
BBC: So he's wrong is he?
Poole: Yes, he's wrong, yes.
BBC: So, where else have they built stuff then?
Poole: He's implying that all offshore companies are cowboys and crooks, which is patently not true.
BBC: BUt have you seen any of their other developments?
Poole: Well, this is probably a one development company. It's a vehicle that many many companies use.
BBC: So they haven't got any history of developing a place like this?
Poole: I'm not aware of any history.
BBC: So, he's right? Ian Driver?
Poole: Well…yes.

Part 5: Interview with Terence Painter, agent for SFP.
He does go into that the developer doesn't need the freehold, but that it would be nice.

There's a Facebook Group for Friends of Ramsgate Seafront. They're currently aiming to get 1000 signatures on a petition to TDC by Monday. As ever, Michael Child is excellently on the case over on Thanet Online.

Posted by Louise Oldfield at 19:28