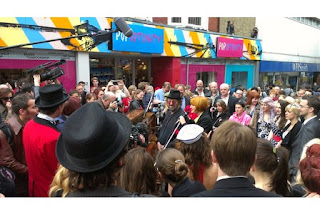 The Guardian's Randeep Ramesh has published an article showing what we in the original bid team had suspected all along; That there was a closeness between Mary Portas' TV production company and the government at the highest level. This explains so much of what has happened to me and my colleagues over the last 12 months. I need to let this sink in. But obviously when we went to the government for help in dealing with Optomen TV, well, it was a hotline to the TV company.

The PR machine for Channel 4 and Optomen TV has already started with the trailers running for the show. The series starts tomorrow with Roman Road, Margate on the 14th and Lisekard on the 21st.