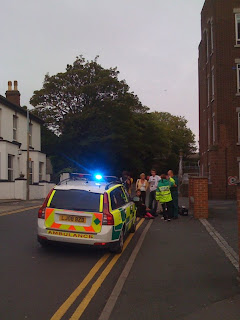 All go at the graveyard tonight. It's a busy Friday night and an ambulance crew were called out to attend to a girl who was collapsed. There were more drunken and rowdy kids inside the graveyard itself and one other collapsed in a similar state. I spoke to a number of them and for some it was their first time there. Apparantly, it's a real meeting point that's growing on Friday nights. Great! No one begrudges teenagers the chance to meet up, hang out and have fun. But when it's in a place as unique as the graveyard and if they are hell bent on damaging it, then I do object.

As far as I know, areas like graveyards and public parks are alcohol free zones in Thanet. Being a secluded spot, it's easy for it to get out of hand in the way that it has been. I thought the police would intervene given it's a regular meet up now.