I've received historical records from the ever resourceful local historian Mick Twyman regarding the cemetery. It was always locally known as the Zion Chapel Burying Ground. The history of the site is interesting, which makes it all the more important it is preserved. The following is information kindly received from Mick:

The Chapel had its roots in the preachings of George Whitefield (1714-1770) who, in his younger days, was a great friend and follower of the Wesleys in the propogation of Methodism. However, in 1741 there occurred a profound difference of opnion between him and the Wesleys on a point of doctrine, with the result that Whitefield henceforth went his own way, promulgating Calvanistic based doctrines both here and abroad, although tied directly to no specific sect. His work caught the imagination of The Countess of Huntingdon (1707-1791) who endowed the funds for many Chapels and Colleges for Whitefield and his followers to preach their doctrines in.

A close associate of The Countess of Huntingdon was Lady Anne Erskine, who had long been a friend and adherant of George Whitefield, was chosen on the death of The Countess to carry on with the task of spreading the word. Consequently, in 1797 a Zion Chapel was opened in Canterbury and its appointed first Minister was Thomas Young (1764-1844). He had been a member of the Countess of Huntingdon's Connexion since his youth, and was much thought of for his work.

In 1802, the Zion Chapel at Margate was opened in Long Mill Lane, now Victoria Road. Contrary to often expressed opinion its site was not that of the present church building, but rather the Pastor's House (usually referred to now as The Vicarage) stands next to the graveyard. In 1811, Thomas Young was appointed the Pastor of the Margate Chapel - a post he filled for 33 years until his death on October 9th , 1844. The last Pastor of the Zion Chapel was the Reverend David Lloyd, who was still in office in 1881 when it was demolished to make way for the errection of the new vicarage to accompany the new church then being built on the site of the old Pastor's house - the Emmanuel Church. Although this might seem a little complicated, all it means is that the buildings swapped their individual sites with the new ones.

The Emmanuel Church was in use up until the outbreak of WWII, when it was abandoned for the duration. On October 30th 1942 at 1040pm, when the streets were mercifully deserted, a lone German aircraft dropped its load of bombs over the area. One bomb dropped directly over the road from the Church in the grounds of the Royal School for the Deaf, demolishing the headmaster's house and killing Mrs Kate Kyley and injuring sic other people. The blast from this badly damaged the front of the Church, the soft brick facade of which was badly peppered by bomb fragments. But it was the tower and steeple at the south-eastern corner which suffered most, causing its subsequent removal. The Church did not reopen for religious purposes after the hostilities, although its adjacent Sunday School functioned until the early 1960s before being taken over by the Margate Ambulance Corps, and after some use as a storage area was finally disposed of for commercial purposes. The textile firm of Kentex using it for many years.

The article to follow plainly shows some of the diseases present on the site from burials. Steaned on the grave plan means brick-lined and new burials were banned in 1857.

A Healthy Resort? Some Facts about the Zion Chapel Burial Ground by Mick Twyman and Alf Beeching.

'Legs' Beeching has been researching the Old Zion Chapel on my behalf, and with the assistance of the ever helpful Whitfield Archive has produced not only a chart giving individual grave locations, but a record of burials telling us what the deceased actually died of. For students of social history such facts are rivetting stuff and give a rare insight into the conditions of the day and they also illustrate how grim the ever present threat of disease must have made life for the people. The Zion Chapel burials represent a good cross section of society, and I have selected a thirty year period between 1808-1838 for this small sample study which involves a total of 280 internments over that period. Although I list the causes of death for those under the age of 16 I have not included them in the final statistics, which relate to adult deaths above that age. The survey is thus based on a total of 208 deaths.

Over the period in question, 42 people died of Consumption, the biggest single cause of death and easily outstripping the 26 souls listed as passing through 'Nature's Decay', or old age. As frightening as that figure sounds, I feel it may even have been higher as a further 9 are listed under the title of 'Decline' (and some of those in their 20s and 30s), and another 2 under 'Inflammation' and 'Inflammation of the Lungs'. I feel that Consumption was possibly the real cause of these as Stephen Wales (of Grotto fame) and whose Death Certificate plainly shows a serious case of Consumption is listed at a later date as dying from an 'Internal Abscess'. Whatever the reality, Consumption was the scourge of the people.

Also listed are deaths from Cholera and Typhus Fever, diseases which are thankfully almost unknown in the civilised world today, although still prevelant in the Third World and Smallpox. Among the young there are 10 cases recorded of Hydrocephalus (water on the brain), a case of Scurvy and 3 of Scrofula, a tubercular condition of the glands and bones. Measles carried off 8 youngsters and complications arising from the basic process of teething a further 7. Amongst other illnesses and diseases we find that 6 died from Pleurisy, 6 from mortification (gangrene), 3 from Gout, 6 from Apoplexy, 7 died from Cholic or Billious Fever and 4 from 'Sudden Death'. A total of 5 died from complications of the blood and a further 4 suffered their end through ruptured blood vessels. Rather surprisingly, only 3 ladies appear to have died through childbirth.

This makes for sombre reading and we should be thankful that advances in medicine and treatment, which we take for granted today, has improved not only our quality of life but our life expectancy too. From these records I have extracted the following information which gives a graphic insight into those times. At death the average age was only 46 years, that figure being made up of the female average of 51 years and the male of 41. How lucky we are today!

Given the information of the number of infectious diseases of the deceased and the fact that many of the graves were brick lined and burials forbidden after 1857 (although family members allowed later), it seems inappropriate that this site should be used for a play area for primary school children.

I have obtained a useful handbook called Saving Cemeteries from the National Federation of Cemetery Friends. I'm about to read through it. From first glance, it looks really useful. A copy can be obtained by contacting them.

There will hopefully be an article in this Friday's Thanet Gazette. There have been more incidents of vandalism, graffiti and the police and TDc have been notified. 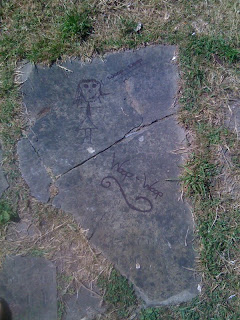 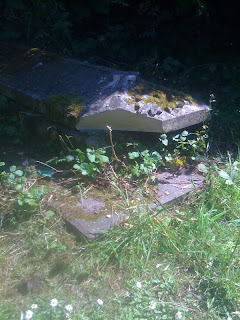 One of the gravestones to have been damaged is that of a Thomas Gardner (I need to check the spelling of this). It is situated in front of the Cobb memorial at the back right hand side of the graveyard. It states on the stone that he served as 'her Majesty's bodyguard'. Next to this was a heavy stone monument.

This has now been pulled off the base. 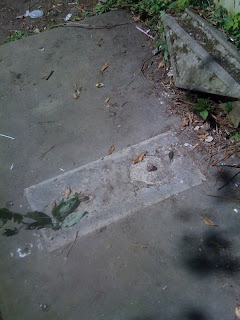 The piece has been smashed. The main remaining piece hidden in the bushes is so heavy that two people cannot lift it. 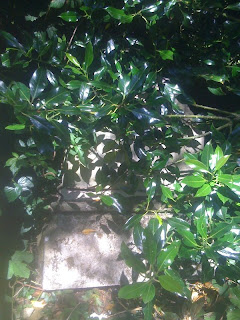 It had taken therefore a group of people to remove it and damage it. How sad and quite frankly mindless.
Posted by MA at 15:56