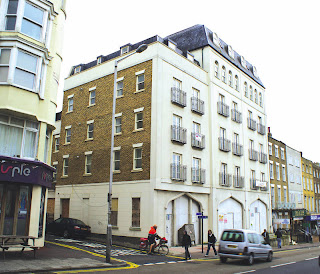 Found on London auctioneers Allsop's website:
http://www.auction.co.uk/residential/LotDetails.asp?A=709&MP=24&ID=709000125&S=L&O=A
The awful development on Marine Drive, that ended up loads taller in height than it was supposed to be, and has always stood empty since it was built. Really what is the point of this kind of regeneration development?
Update:
I don't know the planning status on 5-6 Marine Drive. But from this lengthy Leasehold Valuation Tribunal decision (PDF) from February 2010 between a Flat 17 and the freeholder Comehomes Cororation Limited it is supposed to have been built 15 years ago. 12 flats were sold on long leases and the remainder vacant. Sounds like a miserable affair with the leaseholder suffering from unfinished communal areas, no letterbox and no provision of service charge accounts. They were hounded with £25 a pop letters from the freeholder! Nice.
Posted by MA at 16:57

Email ThisBlogThis!Share to TwitterShare to FacebookShare to Pinterest
Labels: auction, for sale