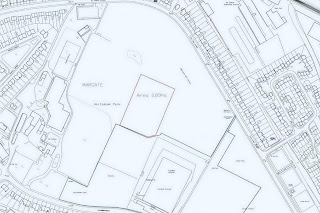 I'm a bit late on this one as I've been up to my ears in stuff of late. From the island's favourite bookshop, comes news of the disposal of a large are in the centre of Hartsdown Park and the creation of a fenced off artificial pitch:
Michael's post here:
http://thanetonline.blogspot.com/2010/07/middle-of-hartsdown-park-to-be-disposed.html
I've 'borrowed' Michael's image as I think he won't mind seeing as it's important to cover this. Its already been decided and planning permission to construct granted.
Did you know about this and what do you think?
Did this slip by the local press?
I believe there is a petition from parks users. Will post back here with details as soon as I get them.
Posted by MA at 16:24