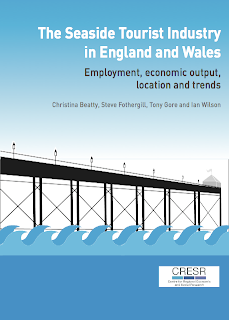 I heard Prof. Steve Fothergill speak at the Coastal Communities Handbook Launch at the Wintergardens back in January. The report is available for download at the end of this post.
Issued 28/06/10
A major new report released today (Monday) finds that the seaside tourist industry in England and Wales remains a substantial and growing employer.
The Seaside Tourist Industry in England and Wales, by a team at Sheffield Hallam University, explodes the popular myth that the increase in the numbers of foreign holidays has destroyed the economy of Britain's own seaside towns.
In fact, the British seaside tourist industry continues to employ as many people as the whole of the telecommunications sector, and more than the motor industry, the aerospace industry, pharmaceuticals or steel.
The report uses novel methods to disentangle the jobs supported by tourism - in shops, hotels, bars and restaurants for example - from those supported by local consumer spending. It finds that:
The seaside tourist industry in England and Wales directly supports some 210,000 jobs spread across more than 100 resorts. Large numbers of additional jobs are also supported indirectly through the supply chain.
The Blackpool area has the largest single concentration of seaside tourist jobs - more than 19,000
No fewer than 58 individual towns each have at least 1,000 jobs in seaside tourism
Since the late 1990s employment in the seaside tourist industry has actually increased by about one per cent a year - an overall growth of 20,000 jobs
The estimated value to the economy of the jobs in seaside tourism is around £3,600 million.
The report provides local figures on seaside tourism employment for 121 individual resorts around the coast.
Professor Steve Fothergill, from Sheffield Hallam's Centre for Regional Economic and Social Research (CRESR), who led the team, said: "That a large seaside tourist industry has survived and adapted is good news, not just for seaside towns but for the British economy as a whole.
"Leisure and tourism is a growing market. What our figures show is that even in the face of stiff competition from holidays abroad, Britain's seaside towns have been able to retain and even expand much of their core business. The British seaside tourist industry remains a major employer. The new government should make every effort to ensure that the industry delivers its full potential in the coming years."
Peter Hampson, Director of the British Resorts and Destinations Association, said: "People who follow the fortunes of the British seaside tourist industry have always known it is a myth that the industry is in terminal decline, but we have not had the comprehensive and convincing evidence to prove otherwise until now.
"Britain's seaside resorts face challenges in responding to changing economic circumstances and consumer tastes, but what the Sheffield Hallam report tells us is that in many places around the coast the seaside tourist industry is still alive and well - and growing. The seaside tourist industry has been written off too often. This report highlights its resilience."
The report can be obtained on the CRESR website at www.shu.ac.uk/cresr The Seaside Tourist Industry in England and Wales: Employment, economic output, location and trends is by Christina Beatty, Steve Fothergill, Tony Gore and Ian Wilson from Sheffield Hallam University. It was co-financed by the British Resorts and Destinations Association, North West Development Agency, South East of England Development Agency and Visit Wales (Welsh Assembly Government).
For press information contact: contact Laurie Harvey in the Sheffield Hallam University press office on (0114) 225 2621, email laurie.harvey@shu.ac.uk
cresr-seaside-tourism-report.pdf (2.28MB)
Posted by MA at 08:14