This is the original bid video from the Cornish town of Helston. A brilliant community sing-a-long, that as a person involved with Margate's bid, I know will have taken a great deal of time, work and commitment to get together. It's full of hope, spirit and fun. Helston weren't successful in their bid to become a Portas Pilot town, but their brilliant video went viral and has over 12,000 views on Youtube. It will also have had no budget, no celebrity and no promise of television exposure. Compare that to the number of 'pledges' the winning towns have had on the official Mary Portas website.


Last weekend, Mary Portas and her film crew from Optomen organised a clean up in the winning Portas Pilot bid own of Liskeard, also in Cornwall. Mary filmed this for her upcoming documentary made by Optomen TV. Remind you of something?


Similarly, Margate's winning bid video was also a community sing-a-long. We organised an impromtu rendition of the Chas and Dave classic, Margate. Organised in less than 48 hours, also with no budget in a High Street with no frills. We openly invited residents of Margate to get involved. It was key to us winning Margate the bid. The community turned out and participated to secure this opportunity for their town. This is the result. I'd like to also to especially thank my dear friend Jane Behrends, the gorgeous woman wearing the false nose. Jane is sadly no longer with us. She passed away in September, taken from us too early by cancer. We miss her terribly. Jane believed in Margate and she believed in friendship and the true essence of community.

On October 20th Mary Portas and Optomen organised the 'Margate Relaunch'. Mary and Optomen TV re-staged the same setting of our bid video, in the very same location, singing the same song. They re-staged the group rolling of the piano up the High Street at the end.

This is what Margate Town Team had to say about the efforts of the community who secured the bid on their Facebook page. 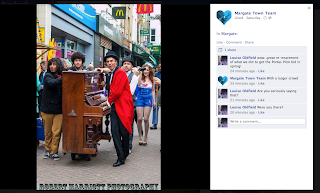 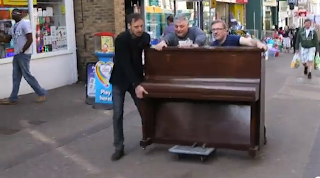 Posted by Louise Oldfield at 21:05